Ok, so after that frivolous sojourn into the surreal that was Heathens Global #5a: emergency press conference, let us return to all things FM, the bit where we know it’s a game and blog about it.

First off, before I forget, we got promoted at the first time of asking and are now in the Premier League again where we belong, oh yeah baby 🙂 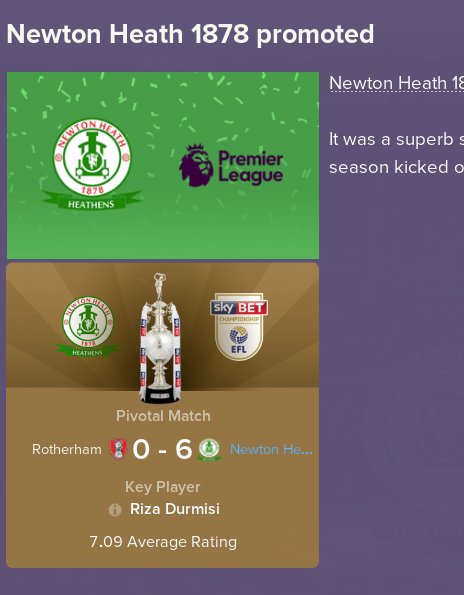 I have to say that it wasn’t really a surprise as we were predicted first, but to do it on a Championship budget, with the avg wages and transfer pot as the other top 4 teams was very satisfying, but even more so because of the way we turned it round in the final half due to a change in tactic.  Here is the schedule to show you what I mean, with the turnaround literally occurring at the exact moment I changed the tactic on the 2nd Feb against Derby, starting that 16 game unbeaten run and moving us from 6th to a firm 2nd.  To put it into perspective, in the previous 16 games we had scored 20 points and in the final 16 we scored 34 (forget that last defeat as I played the kids). 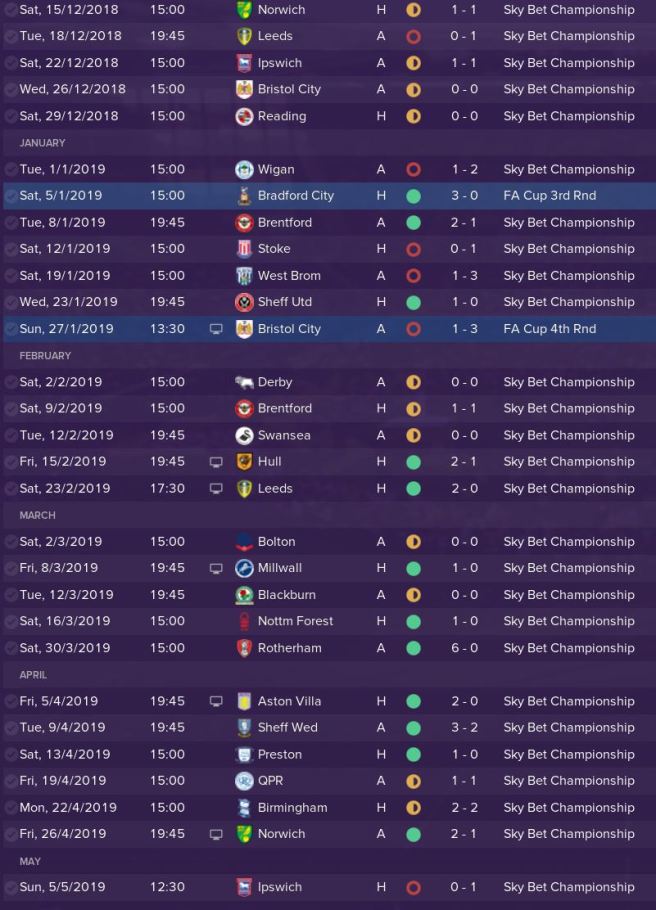 Now before I go any further it’s fair to say that, while I think I am a pretty decent FM storyteller I am not the world’s best tactical genius.  I’m not the worst either, I suppose, but I think if I had an attrib of 12 for tactics that would be generous, with my approach best summed up as a trial and error system that is sometimes blind luck but often off-the-mark, with waaaaaayyy too much tactical tinkering that sometimes leads to slumps that I have to over-analyse to get out of, which I usually do ok tbf.  However, I have decided this year to put that behind me and make an effort to improve this side of my game, with this list of DOs and DON’Ts:

With that in mind, I decided upon the vertical tiki-taka in a 5212 WB formation this year straight out of the box as mentioned in the first blog, as follows: 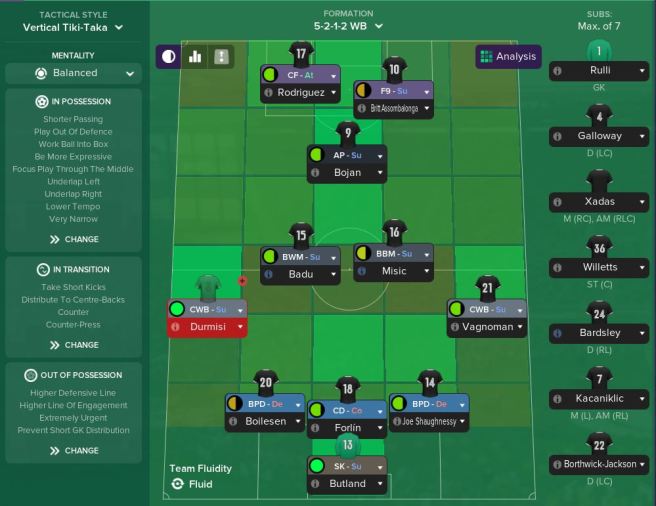 The tweaking of the roles soon followed e.g. changing the CWBs to WBs, the BPDs to CDs etc and also a few instructions such as removing underlap (as we were getting no crosses at all from the WBs and were hitting a brick wall centrally in the final third) and in general it seemed to work ok until around the start of December when the AI sussed us and we started to lose every other game.

Soon though the rot had started and by the end of Jan we were deep into that slump after breaking one of my first “DOs”, which was “analyse more after defeats, not just when it gets too late”.  I had also started to tinker again, so decided to take a few days away from the game and consider the problem.

On returning I went and watched a few of the defeats on full match, which is something I often do and would highly recommend to identify problems.  This is what I concluded:

To sum up, we needed to cross earlier and play wider to make better use of the WBs, while also keeping narrow in defence and win/stop losing possession more in the DM space.  We also needed a faster counter so our strikers arrived earlier ready for any passes.  It took a while to work out but this is what I went with and the reasons why:

That said, this is how it looked: 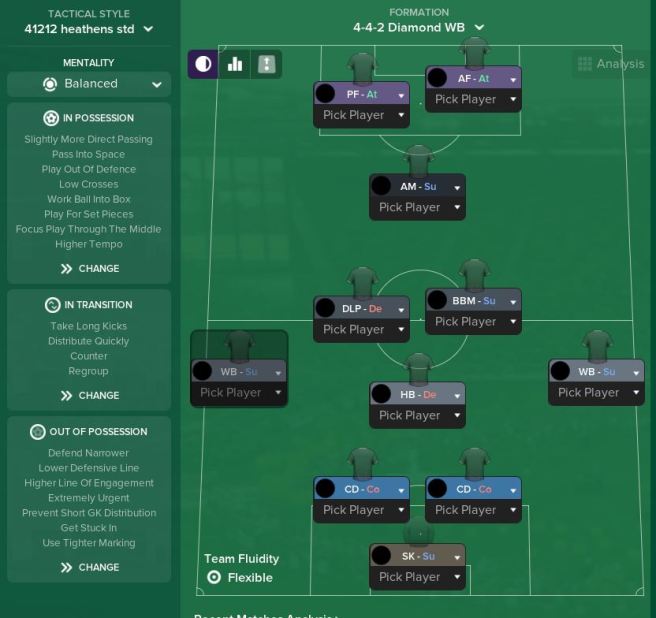 So how did it play?  Obviously it went well going off the results. It’s not a world beater by any means, with a lot of 1 and 2 goal games but we are far more secure at the back and the other stats back it up, taking as an example 5 games in the slump in December and 5 games after it had bedded in Feb and March:

As I said, I was keen to explore this role as I have always liked the interplay between it and the CDs’ behaviour as it naturally pushes them wide when he drops back, providing loads more passing options.  I had tried it at the end of FM18 last year with Amadou Diawara at Napoli and it had worked ok so that had encouraged me, though of course it can leave you exposed if you lose possession and your CDs haven’t got the what it takes to track back.

For those unfamiliar with this, here is an example, when we gain possession and the HB Ranocchia stays central as the two CDs, Forlin and Boilesen automatically go wide – in addtion, you can see the WBs bombing forward at the same time (we nearly scored from this as the direct ball to our striker soon followed but he fluffed it):

.. and here’s another example immediately after kick-off leading to a goal, where Badu the HB passes the ball back to Misic, who plays it to Tibbling, who in turn plays the through ball to my now more advanced striker:

In defence it’s working well too, especially with the ‘defend narrower’ instruction, where as you can see here, Badu fills that DM space we were having problems with and beautifully cuts off the run from their striker:

That said, here is the vulnerable part, when despite them not being too far spread we are punished by a killer direct pass when we lost possession high up the field, though this is happening much less now:

More of the same, I hope.  Though I am worried that we will get seriously picked off by the quality of the Premier League attack in general, which will be much faster than we are used to.  I suspect that we will cope reasonably ok with the proliferation of IFs in the league as they cut inside into our narrow DM area but on the other hand anyone playing with width could cause us serious problems from crosses.  That said, I think it’s going to be a case of strengthening all those key positions as much as I can with the 55mil I have (I actually have 75 but I’ve decided that 20 is going on new loanees for the affiliates). Badu, for example, is not good enough so that HB position I think will have to be a priority.

So that’s it for now – hope you found it interesting and see you soon.