🎵 .. a ray of hope flickers in the sky
A tiny star lights up way up high
All across the land, dawns a brand new morn
This comes to pass when a save is born .. 🎵

(sort of) Johnny Mathis, 1979, three years after the Heathens signed up Penarol Paganos as their first affiliate

.. after two months in the planning and graphics stages and weeks in the editor I am pleased to announce that yesterday my beleaguered PC gave birth to a bouncing green and gold FM19 child whom I have named Heathens 2.0. It’s an odd name I know but as another Johnny, Mr Johnny Cash, expressed in his seminal work ‘a boy named Sue’, these things are done for a reason and I am sure my puzzled child will thank me in the end.

Since the start of the project it is has been fair to say that, while my vision of the alternate universe was clear, the direction I would take through it once it was created was less so, with me spending so much time on the edit that I didn’t really think about how I would use it once I got there, but now I am happy to say that that has changed.

But before we get to my plans in depth, here’s a brief summary of how the team and the world looks under the hood at game start:

So that’s the setup, now let me (finally) explain the plans and aims.  First of all, let me say that this is definitely not meant to be an attempt to OP the game via the affiliate system, though if I do play it right it will be difficult to avoid I guess.  Instead, it is done to advance the Newton Heath 1878 story as a continuation of their history from FM18, as I have always liked saves with a story above league titles and trophies – which is a good job because I’m not always brilliant at that side of it.  With that in mind, here are the objectives of the save:

In other words, I want us all to be very successful via a network of mutual support, which is kind of hippy-like but also pretty cool (man) ✌

Meeting (and making) the team

You can edit graphics, names and team details as much as you like but at some point you have to press start and walk through the doors into the meet and greet.  Testing had revealed that it would be impossible to enforce my idea for a transfer embargo as a) I had to empty out all the players from the Utd team template and b) there was no way to fill the team realistically with the right level of players I required as the AI would either fill it with 2 star players worth 50k each at the most or just rename all the Utd players.

In other words, I needed players suitable for a top of the table Championship side, with one or two elite mid-table Prem players thrown in for good measure to fit the narrative of a mid table but struggling top division side who had been relegated prematurely.

After some research looking at squad values from mid-table Premier League and top-half Championship sides it was a lot more than you might think, as follows:

In addition, the wages for the top three Championship sides averaged at about 850k a week so I eventually decided on that figure plus a tight 150 to 250 mil transfer kitty so as not to make it too easy, though how to spend it was the next problem.  Should I do it all myself, which would give me more control but less believability in terms of me walking in to an empty room with no players? Or step in and holiday for a while to let my DoF buy the team, which I felt better about.  In the end, I decided on a mixture of the two to give me at least a bit of control, meaning that my new DoF, Frank McParland, would find the majority of players with me applying final veto.  This would then allow me to recruit with a set tactic that I had had in mind since the whole project began ..

Recruiting for a tactic

It is fair to say that the inability for the FM18 Heathens to play the 532 WB really pissed me off.  It’s a tactic I had used in previous editions to very good effect but for some reason last year I just could not get the bugger to work.  However, with a clean slate and an absolute hatred of wingers who ALWAYS seems to cut inside rather than cross this year I decided this was where we were going, albeit in an adapted form, using the vertical Tika-taka.  I will change it as we go no doubt but this is how it looked straight from the box:

Apart from the overall shape and ethos, what I like about this is the AP in the AMC strata, which in my opinion is crucial to its success as it provides a central option for the CWBs and MCs to play to, giving us an overload approaching goal.  However, in defence those BPDs worry me as last year they were a liability at times so they might need to change depending on the available personnel.

What followed was one of my favourite few hours of FM playing for the last few years, when after a slow start McParland started to throw players at me that mostly matched the positions really well, leading to this first team which I am very happy with:

As you can see, they’re all pretty well matched to the roles with only a bit of work to do and we even have a cheeky libero in the form of Boilesen there on the left BPD, which I am very much looking forward to playing around with.

So in summary, here were the transfer dealings, coming in at 146mil. Bear in mind that I was not only recruiting for the first team but also my U23s and U18s as well, for prospects and loanees to send out to assist my affiliates, though I did take the odd player from them as well to further their development: 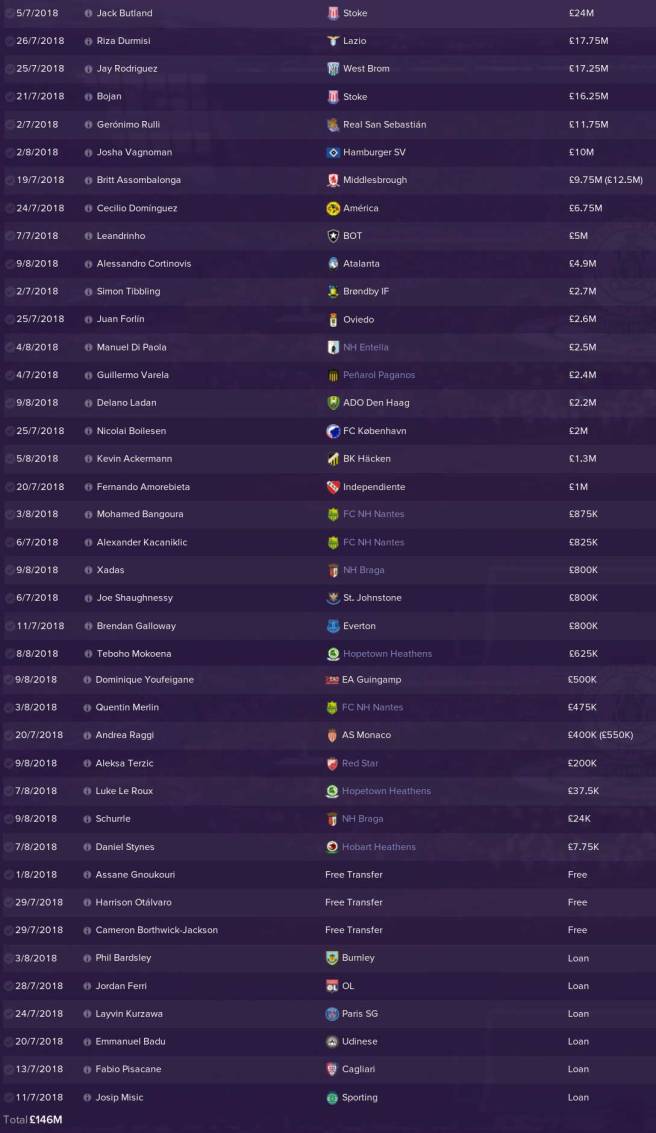 I then proceeded to spread the wealth and sent these players to my affiliates, apart from the awkward bastard Daniel Stynes who refused them all and would only accept Gefle IF, which I seriously think was just to ruin my lovely purple text (the bellend):

So that, my friends, is it for now.  The die has been cast so we will see what comes out the other end, though without giving too much away we are 3 games in unbeaten so all is good so far.

I hope you enjoyed reading this and I hope to see you again for the next episode.