Welcome back to my Dynamo! Beta save update and what a 2/3 of a season it’s been.  We have now hit the 3 month (bloody) winter break (boring boring) so while I’m holidaying the first month here is a quick update of the state of play in our quest to overcome Shahktar.

Firstly, let me share with you a late-90s comedy show reference that I have been using far too often this week in referring to our push/pull relationship, which for those who are uninitiated, not British (unless it went worldwide) or too young, involved two animated characters facing off in a huge stadium to massive crowds as they stared each other out in the brilliant ‘Big Train’:

And that, my dears, is basically us and Shakhtar.  As my old dad used to say, there has been nowt but a Gnat’s ball between us since the start of the save, with them occasionally pulling ahead but us catching them again and hanging on to their flapping shorts as they try to get to the top before us.  But let’s break it down into more detail, with our relative performance in each competition.

Now some people (such as the Board) say that the Ukrainian version of the charity shield is not important.  Unless you win it, which we did, beating Shakhtar on penalties i

n our first game of the entire save!  Woooooooohoooooo!!!!!!

Putting aside the fact that they basically played the backroom staff instead of their first XI, it’s a chalk-mark all the same and I was chuffed to get off the mark so early, so hey ho.  Not only that, we absolutely dominated as you can see by the stats.

All in all, despite it being a non-comp I was very well pleased with the new tactic (as seen in previous post) though there was clearly work to do on shot conversion going forward.  Here’s the tale of the tape to show you what I mean:

Early doors it was clear we had fight on our hands as, in a similar way to Juve in my Napoli FM18 save, Shahktar immediately proved to be formidable opponents in the real (non Charity shield) world, sweeping every team away before them with total contempt – including ourselves in an absolute 3 nil spanking at home in our first meeting in anger.  Here is their unbeatable run up until the day before our second meeting: 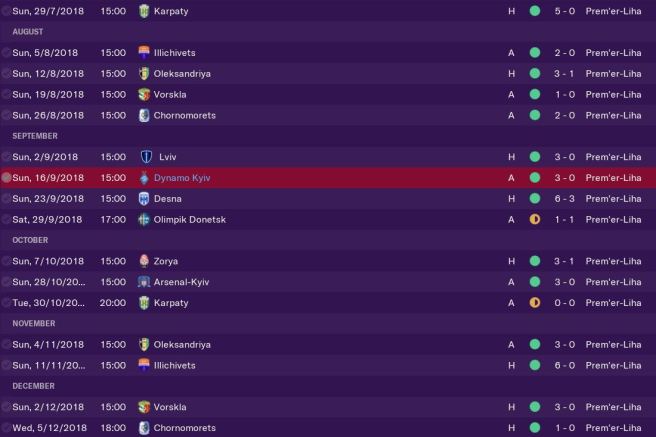 .. until this happened, when we beat the buggers 2-3 on their home turf, oh yeah 🙂 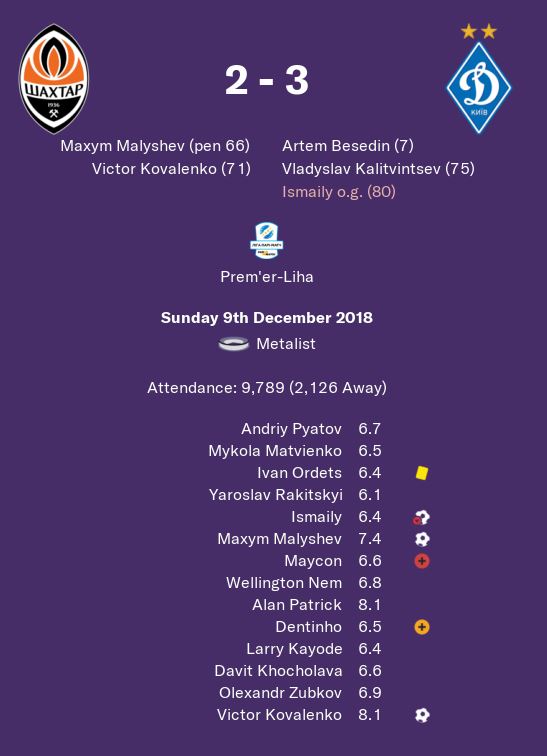 In terms of our own performance, we weren’t far short with just another loss and a draw, meaning we are now just a point behind them at the end of the break in February (I can’t help thinking though that the GD is going to haunt us come the day the fat lady sings):

You can probably guess by the title that this didn’t go well, with us quickly going down the Europa route from our UCL qualifier after losing on aggregate to old rivals Spartak Moscow.

I would like to claim that it didn’t mean anything as topling Shakhtar domestically is the aim of the save but that’s not true, I went for it good style and still got bent over by pretty much everyone.  Without labouring the point, here are the fixtures so we can move on quickly and pretend it never happened:

This is an interesting one in that both Dynamo and Shahktar have shared the spoils of this cup (apart from 4 times) for the last 25 years, but I am pleased to say that this year with Shakhtar knocked out in the quarters it could be ours for the taking – we face Illichets in the semi-final who are 10th in the league so bring it on!

One of my favourite things about being a part of the FM twitter community is the help that people give you about any aspect of the game, so when I started to flounder a little in the league I posted this query below. I’ve also included the brilliant reply from Daljit @BusttheNet as I think it really sums up the end tactic it led to.  His was just one of many answers from loads of people who helped me work the problem:

That said, I created the tactic with the following aims in mind:

.. and this is what we arrived at leading into that 2nd game with Shahktar, which of course we won 2-3.  Note at this point that the roles are flexible depending on the teams (e.g. my SV would be changed against better teams) and ignore the glaring red square as it hasn’t been a problem at all:

You might also notice that I have labelled three players ‘NEW’ so you can see where I have recruited, namely to fill much needed gaps that I had identified as weaknesses.  For example, we only had one AML in the brilliant (though constantly knackered) Benjamin Verbic and I just couldn’t resist bringing Renan Lodi on loan from ATP, who I am determined to shape into my new Marcelo.  His personality needs work but he has so much potential that is ripe for the new mentoring system to exploit imo:

So there we go for this tale of 2/3s, best summed up as a work in progress that is definitely showing some results as go into the final third with some decent recruitment based on community advice and some decent scouting (although I say so myself).

Thanks for reading and see you soon 🙂