Well hello again and welcome to my new blog for my FM19 beta save, simply called ‘DYNAMO!’ as it is with Dynamo Kyiv, the once formidable Ukranian powerhouse who have been in a constant battle with the mighty Shaktar Donetsk for almost 30 years for league domination.  But why Dynamo?

In short, the first thought of doing a save with them came to me a long time ago when I’d only just got back into FM after a long lay-off in 2013-14, when I read the book ‘Dynamo: defending the honour of Kiev’ by Andy Dougan.  The book is absolutely excellent and describes the story of how a cobbled-together team of malnourished and mistreated former players faced a team of incredibly fit and healthy evil Nazi bastards several times in exhibition matches only for the Nazis to be royally handed their arses on a plate.  I won’t give away any spoilers about the end but it’s enough to say that it is an incredible story of endurance and defiance that will leave you similarly inspired I’m sure.  If you would like to buy the book you can find it here on amazon.

So, that said, it’s been in the offing for a while and I was just waiting for the right opportunity which I think is now for the FM19 beta.  Aside of the history, here are the FM reasons why it should make a good short save:

That said, with only two weeks to my main Newton Heath Global Domination save and without time to either emulate Lobanovskyi properly or win everything in sight. the aim is very simple, to win the league!

First look at the team

I have to say I was very pleasantly surprised as the team looks ok to go right from the outset with a strong midfield and maybe just a few additions required for Def and Att (we only have 1 natural ST in Artem Besedin atm).  Sure, they’re not all 4 star (only 7 in there) but as always the stars don’t tell all the story and the range of positions and spread of attribs is very encouraging indeed, with many players in the 11-16 range almost across the board and almost every one of them being able to play in at least 3-4 positions as natural.  They’re also a young squad with plenty of retrain possibilities just perfect for the new FM19 training and mentoring system.  Of course this also means we lack leadership, so this is something I need to address in the market, maybe with an elder statesman CB if I can find one.

Here is a quick snapshot, including my own acronym system which I always use for the first couple of games to let me know my starting XI (if you are interested in the system, I blogged about it in FM18 and you can find it here) I get rid of it about a month in but I have always found it very useful indeed:

.. and here is a sample of what I mean by the versatility of the players, with my midfielder Denys Garmash:

We also have some good depth in the U21s and in our loaned out players, some of whom are annoyingly good but have only just been loaned out, meaning I can’t bring them back within this window 😦

I also enjoyed bringing back my mindmapping planning method which I used throughout the Heathens’ FM18 save, with an added squad review this time as follows: 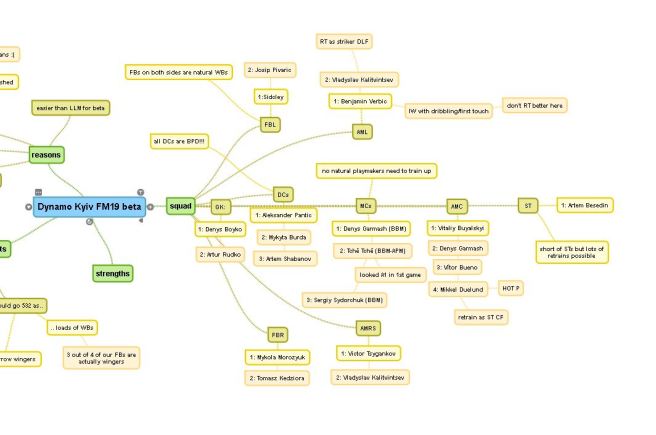 With all this in mind, here is a quick summary of my squad review based on all this:

In terms of tactics, I have tried to draw inspiration from Lobanovskyi’s high pressing style and conveniently FM19’s brilliant new tactical style choices include the perfect match with a ‘control possession’ style that will be a cracking starting point with the roles and instructions to be tweaked later on.  That said, these are the two shapes that I would like to try – firstly, the  4231 wide, which I used in a friendly against Everton to reasonable effect, drawing 1 all and dominating possession and passing (roles are straight of the FM box): 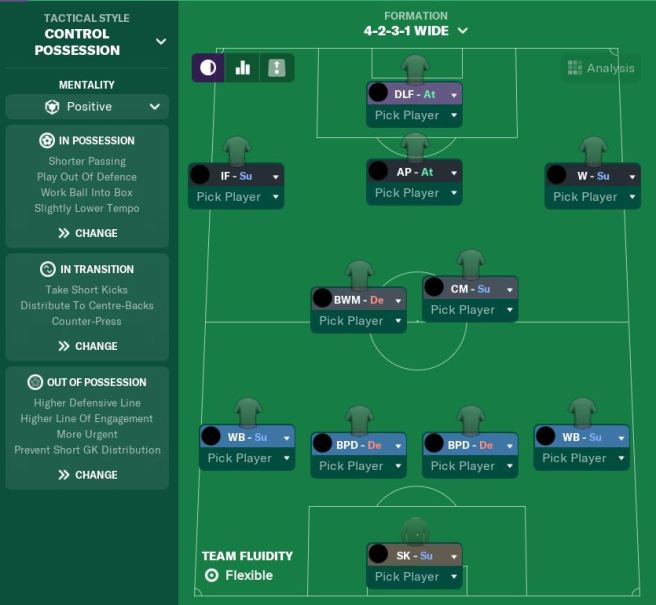 Here are the pros and cons of this IMO:

That said, I’m thinking that this would be a better variant, which allows the WBs to move up on overlap into the space vacated by the left IF and right IW (both natural roles for my best players on those sides), with the MCs dropped to the DM strata to give us cover.  It does leave a hole in the centre of course but this should be covered by the DLPsup and the IWsup.  As you can see, I’ve added the overlap instruction and (brilliantly, this year, thanks SI) I can always make this one-sided if needs be: 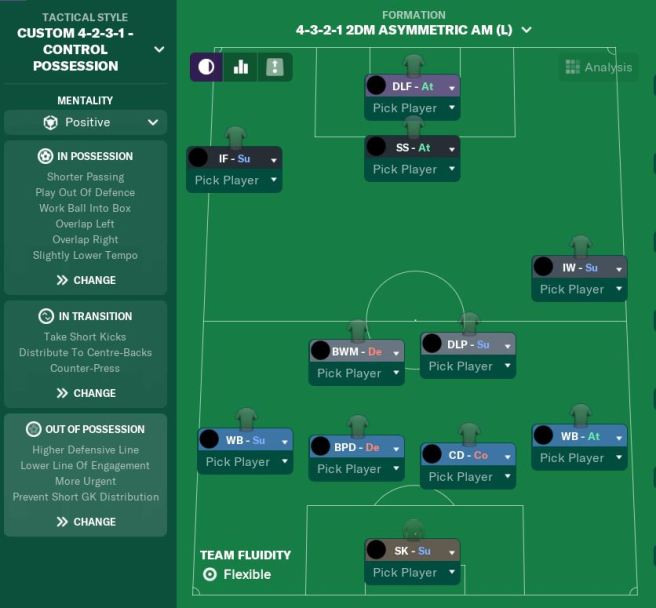 As well as this I have also used the new defensive shape sliders to compress the centre and close that gap when out of possession, as follows: 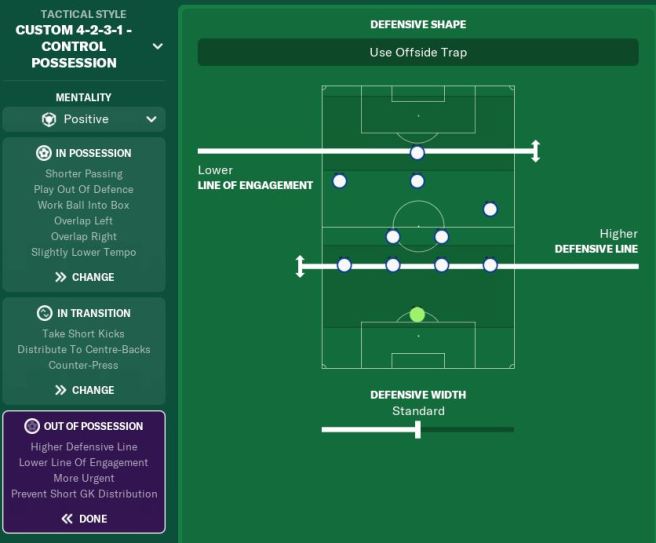 Of course with only one game under my belt it remains to be seen if my frankentactic will work but we shall see.

Another formation that the squad is VERY WELL suited to is the 5221 WB, due to me having loads of WBs and AMCs, but with a lack of depth in defence I’m not sure I’ll go there yet unless we transfer in.

So that, so far is where we are up to.  To sum it up I think I have a good core squad with loads of potential, suited to a strong high pressing tactic with (possibly) a narrow style.  We lack leadership and depth in defence and attack and I probably need to recruit with that in mind.

Thanks for reading so far and I hope you join me for the next instalment.

4 thoughts on “DYNAMO! #1: In defence of overdue honour”