We have come a long, long way together, Heathen fans.  From a cobbled street and a filthy council croft in the shade of Clayton Gasworks to this, our stunning ‘New Bank Street’ stadium unveiled just days after our greatest triumph, lifting the FA Cup against one of our bitter rivals from down the East Lancs, Liverpool 🙂

What a game and what a day, especially because I got this dreaded email as we were getting on the coach, with the board pissed at me for our 7th-place league finish despite me getting the club into both their first ever Europa and FA cup finals!

Now given that I had already said I would be leaving after the game anyway, you might think that wouldn’t bother me, but pride meant that whatever happened I WOULD make sure I won the bugger. I have not put over a thousand hours in for nothing, I thought. The (alternate) history of this save deserves a fitting end such as beating the scousers.  I also noticed this little news item:

So there you go – the end game was all setup, with a Wembley final deciding the fate of either me or the Liverpool gaffer, Diego Simeone, the diving bastard who cost us the World Cup in 1998 after being accidentally tickled by Beckham – what could be more perfect? (Apart from it being Manchester City instead) 🙂

On the day we arrived at Wembley full of hope and grit but absolutely knackered after a massive run of games. Deciding to prioritise trophies over the league, as previously mentioned we had incredibly also managed to get into the Europa League final as well just two days before.  However, from scouting reports and watching our opponents, RB Leipzig’s last game, it was clear that it would be nigh on impossible to beat them at the final venue of Ibrox.  On the day I was right, and we went down to a very easy 2-1 loss when they barely broke a sweat yet totally dominated almost every stat, despite me preparing for hours and researching every aspect of their game.  I even went to a wider formation to counter their ridiculous goals-from-crosses rate and all they did was take it through the middle instead in a possession game that destroyed our fitness in 30 minutes (we had played our last league game 2 days before).  So onwards and upwards the Heathens went to Wembley and tried to put it behind us.

For Wembley I reverted back to starting with our narrow 4222 tactic which was a revelation in the second half of the season, when I finally realised after years that wingers were not working.  I had been lulled into a wide formation over a period when I had some nice IFs and fast Ws which was reasonably successful (we beat Spurs with it to lift the Carabao three years ago) and I had fallen into becoming one of the worst things in FM, a creature of habit, predictable and easy for the AI to unpick.  As such we were battered early doors for the first half of this season and by Christmas had no consistency and were placed 11th in the league.  Finally I realised that I had about a hundred MCs and DMs and also strikers so came up with this:

To be honest, it’s not far from the default 4222 but I kept working it and adding instructions to turn it into a high-pressing, possession tactic that soon started to have great effect.  At first it was so narrow we were getting battered on the flanks, especially because I was loathe to mark up their fullbacks because it would drag those narrow 6 players into wide positions and lose our central short passing options. There was also something else I added that others on twitter (@Cleon81 and @fmFutbolManager) quickly pointed out shouldn’t work, and that was changing the fullbacks to inverted wingbacks.

Not reading the description properly (my bad), I was thinking very simply that it would compress play even more and overload the attackers and to be honest it did that perfectly  According to the FM description however the role needs wingers and a single DM in front of it otherwise he will basically be a regular WB.  The odd thing was that when I tried them as regular WBs or FBs it never worked half as well.  All I can think of is that that they were operating in the half space at the back perhaps more than a regular WB, maybe when my DMs were out of position and higher up the pitch, so in other words giving us cover in the DM strata.

That said, who cares?  It worked, so fuck it 🙂 and by mid-February our Franken-tactic had give us a 16-game unbeaten run from mid-December.

So into Wembley we strode confidently with this formation, knowing that, despite them thrashing us 4 nil earlier in the season (with a Martin Odegaard hat-trick) we had pegged them back to a 0-0 draw last time out.  At this point you are welcome to skip to the Youtube video I made if you like, which is here:

Early doors, you couldn’t get a rizla between us and marking Odegaard to death ensured his threat was negated.  We were keeping possession well and were restricting them to a ridiculous array of long shots which was almost like a ‘who can hit the corner flag’ competition.  The second half was the same, as was ET and finally it came to penalties, with both me and Simeone shitting our pants on the sideline thanking Christ we didn’t have any players called Southgate and praying our boys could save at least one of our jobs (in fact at one point I though he was going to come and put his arm round me, so united were we in our dread). 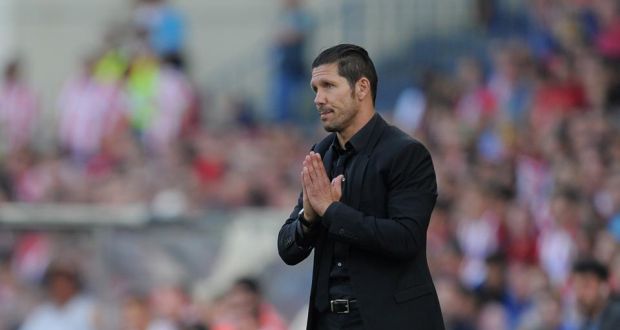 In the end, after an absolute worldie from my keeper Matty Ball, the pens went to sudden death and it was left to my want-away-to-Real-Madrid RB, Fabrizio Fava, to do the business in possibly his last kick for the Heathens.  I couldn’t look as he stepped up nervously ..

.. to hammer it right into the top corner to send Simeone weeping to his knees and the green and gold half of Wembley into absolute rapture.

And that my friends was the end of this FM18 Heathen adventure, oh yeah 🙂

And there is where I am going to leave it for now as I want to do another post to tie up the whole project, which will be more in depth and befitting of the project as a whole.  So keep your eyes out for it on twitter and I hope to see you there soon.