Hello and welcome to a slightly different blog that explores a side of FM that some hardened fans don’t often access, namely pissing about in the editor to create your own complete fantasy/edited league or downloading one created by someone else. Already I can see some of you hitting the back button but bear with me while I explain the benefits and show you my own current example of my edited UK league, a guilty pleasure that took ages to plan and create that has kept my enjoyment of FM18 going at those occasional times when my main save has become a grind.

What is a fantasy/edited league?

I suppose you could define this as any FM database that has been tampered with in some way in the editor, though the level of this can vary wildly across different versions.  That said, at the lowest editing level on a scale of 1-10 (no. 1 maybe) it might just be a re-jigging of the rules for an existing league or the inclusion of a different/higher placed team, while at level 10 it could mean a completely new league structure in a new nation with new rules, teams and cups.  That said, here are a few examples of the varying editing levels:

So why play them?

Easiest answer is that they are great fun and can present a brand new challenge, especially if you’re approaching the end of a save and fancy a complete change that is entirely different from vanilla FM.  Many people for example have really enjoyed the nostalgia buzz from playing Stoltze’s 95-96 database and the Samo and Women in FM DB’s are a refreshing change that add a real depth to the game.

Almost all edited databases can be found on the steam workshop, where you can press the ‘subscribe’ button to run it in your copy of FM:

You then need to start a new career game and drop down the ‘database’ tab on the top right – here you will find your edited db so all you need to do is select it and play.  Do bear in mind however that some of the larger databases such as the 95-96 one do take a lot of time to initially load:

One problem that can occur with all this tinkering is a database error, where the person who has created it has not tested it enough over several ‘holiday’ seasons and as a result something may go wrong, sometimes two or three years into the save, which of course can be a real pain.  To avoid this, make sure you check the steam workshop comments or ask the community for advice for the most trusted and well-tested databases.

My own example: a UK edited league

Ever since I started playing FM I have been interested in alternate scenarios and have had good and bad experiences of modded DBs.  With that in mind, for FM18 I wanted to create something that was unique in terms of the challenge it presented and I also wanted it to be varied, with a wide range of competitions and opposition. The result of this is my edited UK league, with all of the following:

To give you an idea of the depth of the database, here is a screenshot of the tri-minnows league at the bottom of the pyramid, with auto promotion slots in green and playoff slots in blue: 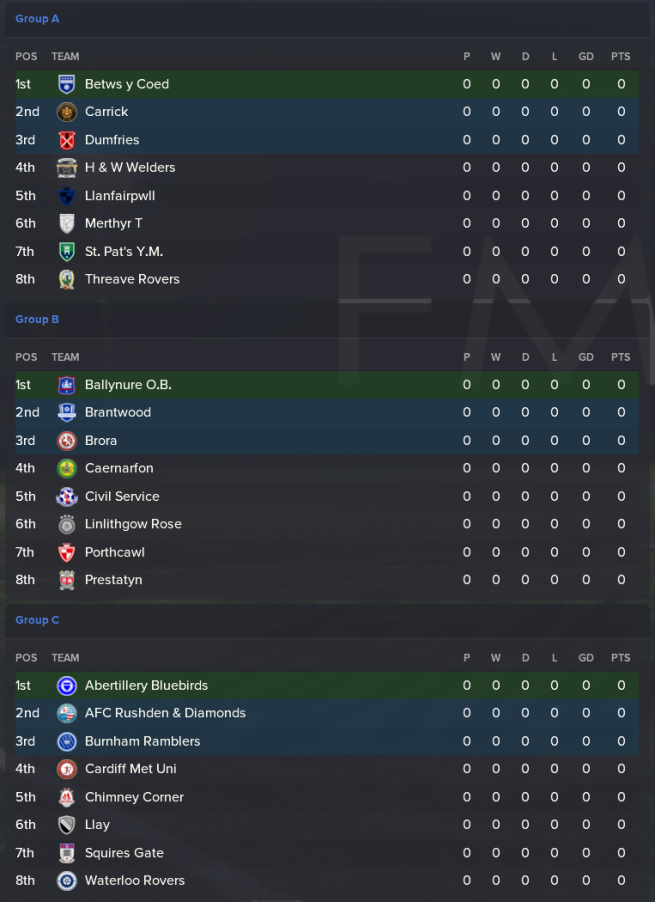 Here also is the competition structure:

How does it play?

Brilliantly (although I say it myself 🙂 ) as I have tested every single part of it thoroughly over many seasons and have also been running a long term save with Corinthian Casuals (which can also be seen on my Youtube channel here).

The interesting parts for me have been the sheer variety of comps which constantly provide a different challenge and the wide variety of the opposition – here’s a sample of the schedule to show you what I mean (if you’re wondering why I’m playing Aberystwyth in the Africa trophy it’s because they’re in my group along with the African teams):

Another interesting consequence has been the impact of the prize money, which as I have mentioned is quite large.  After 4 seasons this has seen the likes of previously skint clubs such as Cambridge who have risen through the leagues get to a 30-40 million kitty and start to attract decent players. Check out my prize money for last season to see what I mean:

Now you might be thinking that this is easy and that you can storm leagues by spending it straight away on players, but if you know your LLM you’ll understand that without the rep it mostly makes no difference and players won’t sign for you anyway.  That said, the save has an added challenge in trying to do the usual FM plodding to increase your rep and beat the other loaded teams to the key signings before they get more money than you.  In other words, it’s about the same as the main game in terms of difficulty yet I guess speeded up a little.  If you’re interested in having a go of this yourself, here is the steam workshop link again and also here is the youtube video where I introduce the league format in more detail:

I have to say that until I started my Newton Heath save obsession this was the best fun I’d ever had in FM.  If you want to see what I mean view the rest of the videos – all the games seem to have something special about them, such as two cup finals in a week or the challenge of facing an unscouted African or Malaysian team. In addition all the usual stuff is there such as youth development and (so long as they’re not from a deleted team) the usual world renowned players.

There are cons of course to match all these pros, such as a slightly longer gap at the end of the season if you don’t qualify for the cup finals and also some problems I had with the yellow card system which meant players get a one match ban after two cards.  To be honest though it has made it a lot more challenging so I have kept that part in in my version (though I think I have changed it back for the steam workshop version – let me know if you use it and this isn’t the case).

So hopefully this has given you a few ideas for an alternate edited save to keep your love of FM going.  I think we all forget sometimes that FM is a computer game after all and it should ultimately be fun.

Would love to hear your feedback so please feel free to contribute your thoughts either in the comments below or by mentioning me on twitter at @FMheathen.

One thought on “Edited leagues: your final FM18 fantasy?”