We did it!  After 5 years and 3 promotions Newton Heath 1878 are now a Premier league team.  In one of my most incredible season closes ever in my whole history of playing FM/CM we won the league in consecutive promotions against odds of 1000-1 and a predicted 24th position (fuck you Sky Bet 🙂 ).  I am so chuffed with my little virtual player dudes who sooooo stepped up when it was required.  They shall be duly honoured in this blog where I’m going to outline three areas where I think the trophy was won, namely 1) THE RUN-IN, 2) TEAM & TACTICS, and 3) STAFF.

Here’s how it panned out in the last crucial 5 games, starting with a pivotal draw against league leaders Brentford on the 9th April, who at the time were only 1 pt ahead:

As you can see it was a crucial turning point, when Brentford’s renewed tenacity under new manager Sean Dyche crumbled under our incessant onslaught, giving them 5 points to our 13 (from a possible 15) during that run in.  This overturned their 1pt advantage to have us win the league by 7 come the time the fat lady sang.  To put this into perspective, having led the league since the previous October Brentford have now joined the choker ranks of Utd (1992), Newcastle (96), Arsenal (08) and Liverpool (14) who all gave away league winning positions in the closing stages of the season (albeit in the premiership).

But this wasn’t the full story as the turnaround for us had started not long after the January window, on the 12th Feb to be precise, when we started to put together a run which saw us drop just 11 points from the next 16 games, including an invincible run-in of 11 undefeated from the 26th Feb to the season end.

This is not unusual for me as my teams always tend to finish strong, but I was surprised because apart from a couple of in-and-loaned-straight-back-out youth prospects there were no changes to our first team squad in that January window, or in fact my tactics which were the same I had used all year (that’s why I didn’t blog it).  That said, I took the attitude of ‘ours is not to reason why’ and went with it, and when we faced Brentford for that draw on the 9th April, the pressure was showing on them, with 2 of our 3 goals coming from mistakes from their CDs.

So what did happen to make our fortunes turn?  Well first of all, we weren’t that far short anyway, with some great runs along the way to get us into that prime position from a fairly consistent 11-15 players.  In figures, this was 7 players with over 35 apps and a further 8 with over 27, which had been an aim of mine for a while to increase team dynamics and therefore links and consistency.  In terms of individuals, without going through everyone, here are my stars for ATT / MID / DEF and GK:

ATTACK: Jamie Soule, an absolute diamond valued at 5m and on loan from West Brom. 40 goals means his agent IS MOST DEFINITELY getting a call in the next few weeks to come forward with me into the prem.

WINGER: Jordan Maguire-Drew, 21 assists – need I say more? Got him on a free a year ago and now worth a cool 9mil.  His assists bolstered Jamie Soule’s goal scoring record so he is a squad essential going forward.

MIDFIELDER: Without a doubt, Martin Calderon, my DLP and my first big signing two years back from Real Madrid for 400k.  Despite not having top attribs, he is the absolute lynchpin of the team (see tactics below).

DEFENCE: The continually moaning minnie that is Nathan Wilson. I swear, if he farted he would fucking lodge a complaint against me because his shorts were too tight.  A total pain in the arse who wanted to leave to go to Blackburn 7 places below us when we’d almost won the league ‘to play with better players’.   A rock in defence last season but not sure if he could kick on to the prem with these attribs and attitude – we shall wait and see. 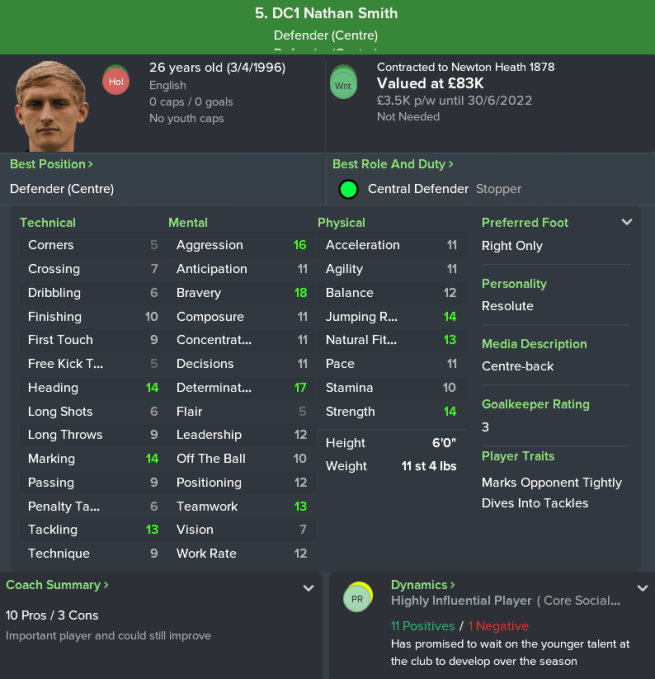 KEEPER: Kamil Grabara, an absolute beast for me late on, who may stay on at least as an understudy next year.

In terms of other team news, I had the great joy in July last of selling a home grown newgen for the ridiculous amount of 7.5 mil, which was by far a club record and which (from the 1 mil I received) I used to buy the keeper Grabara and some tasty S American youth prospects who are now out on fee paying loans ala the Juventus gambit.  But other than that, it was basically more of the same tack of using existing players who had improved over time, with only a couple of top signings such as Soule and some renewed decent loanees.

But how did these all fit together into my tactic?  Here is my asymmetric 442 ‘away’ formation which became so dominant it was used for all games, home or away, since February.  Here it is with notes:

I don’t know if this shows but it is one of those tactics that the team grows into over a couple of seasons, melded both from the best roles for the players available, coupled with a long term playing style philosophy.  For me this was based around the following aims:

In other words, to play proper. intelligent, counter-attacking football with the ball on the ground as much as possible.

Here’s how that looked in games, with an example of how it worked both with and without a resulting goal: 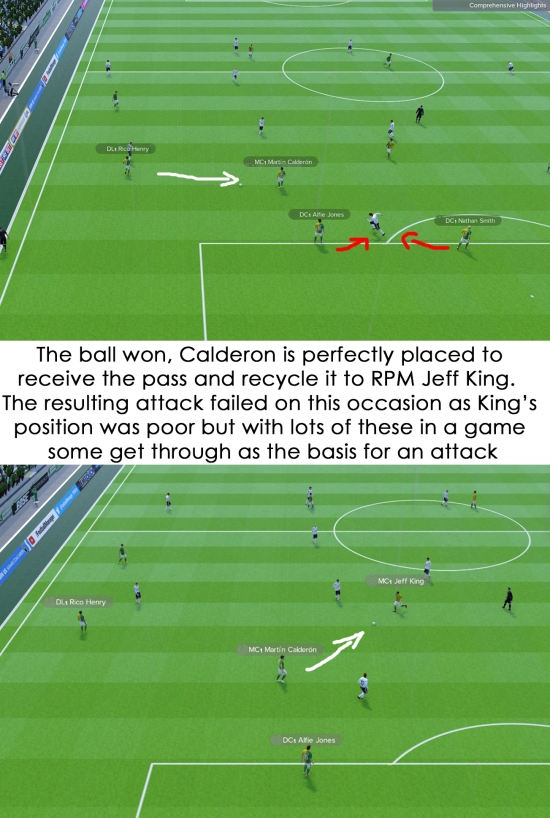 And here’s it working more successfully on another occasion with my winger unmarked, allowing King to complete the pass: 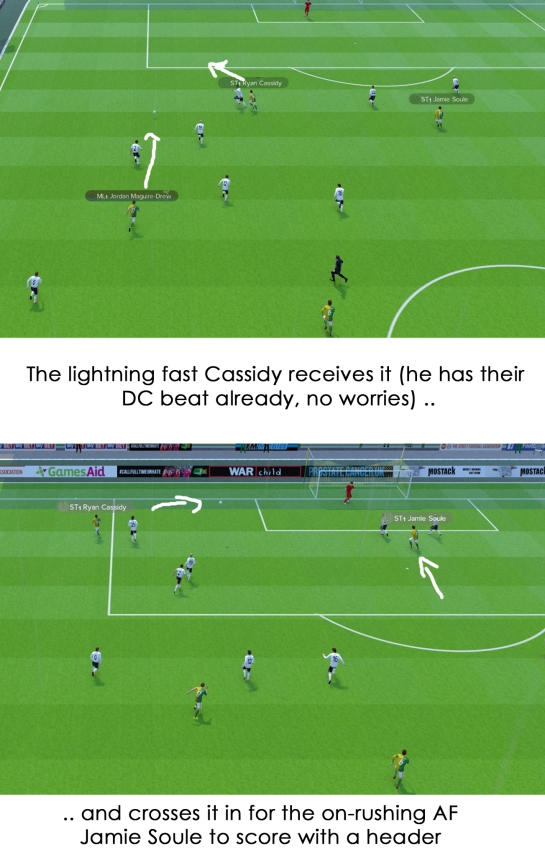 Of course it didn’t always work like that (a notable 5-1 away defeat to Preston springs to mind) but that was the gist of it, the winning of the ball deep and a quick turnaround for the goal.  This was also supplemented by what I would call natural possession goals, where we started with the ball and finished in a similar way (i.e. from GK possession or stops in play).

We all know that winning the league is a whole club effort from the boot cleaners and programme sellers to the players.  With that in mind, a great deal of the success this season I think has been attributable to my improvements to the coaching staff, including one VERY high profile signing 🙂 whom, as you can imagine was snapped up due to the history of the club (PS initially he was wearing a Utd kit so I had to change it as they don’t exist in my world, not that I’m obsessed or anything):

Just to emphasise the impact of signing Phil (we’re on first name terms, of course) here is my old pal Ken McKenna’s attribs, my previous faithful ass. man who was by my side through the last two promotions: 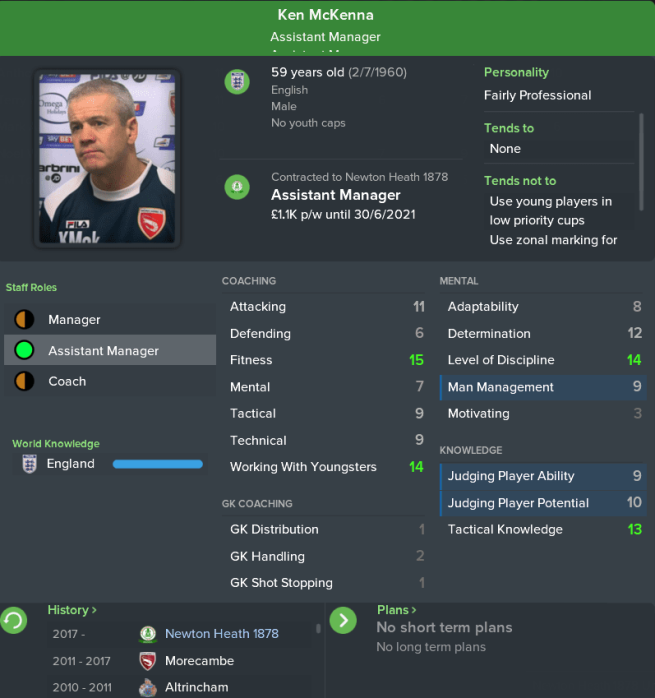 As you can see there is no comparison – Phil Neville is a coaching genius next to ol’ Ken so it was a no-brainer.  I can honestly say though that letting Ken go was one of my saddest moments ever playing FM, he’s served me well as Morecambe assistant right since FM11 so I have a lot of happy memories (even if they don’t include winning much).

In terms of other staffing changes, it’s mostly down to numbers, with an increase in coaches from 8 to 12 and also improvements in key coaching positions such as a better GK coach, which I specifically targeted for this season.

So onwards and upwards with, of course, lots of mindmaps and planning sheets to come.  I will use my usual long pre-season system with the following aims going forward:

The way I will do this is by reviewing the team and renewing/dropping those who can’t step up; buying new players for key positions and keep improving the coaching team.

PS almost forgot, if you take a quick look at my last home fixtures, there might also be a small matter of building a new stadium 🙂 see you soon in the goddamn Premiership.