So here we go fellas, the Newton Heath 1878 save proper.  You may have already seen the first episode of the youtube version here, but this short post will hopefully add some more info anyway, which is my intention in doing both.  In this post I am going to cover the first database test, pressing that start new career button and what I saw when I got in there, when the oddly pale looking newgen boys of my resurrected Heathens were finally born.

After ages of putting the project together, have to say it was with some trepidation when I clicked away to start the save over the weekend, wondering whether the database would work ok (it should, I’ve not touched the league structure) and also whether the team was balanced properly and not too over/under powered.  Like most editor twiddlers I have played a lot of edited leagues in the past of my own and others making and I know they can easily go tits up a season or two in if they’re not tested right.  With this in mind I ran a non-playing (hols) test that seemed to work ok – the database worked, City won the league in the final year (boooooooo) but not the Champions league (wahey) .. and all seemed ok.  As for my beloved Heathens, I’ll let you see for yourself (ignore the 2nd and 3rd trophies, they’re a glitch from the stripped-clean base team that I used – more about that below) ..

As you can see, from when the sim started in 17-18 they got relegated immediately (oh shit, what have I done ..) before rallying to come back and win the Vanarama National in 19/20 and consolidating with a 6th place as of 30th April 2022 when the sim ended.   But it’s only a sim, right? It doesn’t mean anything, does it?

Delving deeper, they had sacked their manager in the March of that first season and are now on their fourth.  Other than that, the DB worked fine, with all cups and rel and prom working ok, so hey ho, we’re up and running.

I didn’t need to check the graphics as I’ve been doing that as I went along, but I did need to check the fictional history as it was a bit buggy early doors, when the base club history kept showing up mixed with mine.  I had used FC United as they had to be removed anyway and it was useful in the editor to have an existing database ID number rather than a newly generated one (if you’re an editor nerd it’s so that I didn’t have to add a new number to all of the config.xml but simply swap graphics instead).   It worked fine in terms of the new club as I had completely wiped every entry in their database for tactics, finances, attribs, staff etc because I didn’t want it to be just FC United in a different kit, so it was a completely empty club from the ground up.  That said, the ridiculous editor gremlin for some reason left those two trophies and also FC United’s Jerome Wright’s record appearances stat, which really pissed me off because I had overwritten it with my own in the editor.   I have checked in the game though and he is definitely an ex-Jerome now, non-existent in this universe like all the other FC United players as was. By the way, this also extends to every current Manchester United player, which is a gutting consequence of me just deleting the team whole without checking first, meaning no Pogba, no Lukaku, no Phil Jones (hmmm .. maybe it’s not that bad).

Here are those records if you fancy having a look (though I go into more detail in the youtube version) and if you want to know the exact story behind every one then let me know as I have it written down in the timeline.  This pic is from the start of the save proper. 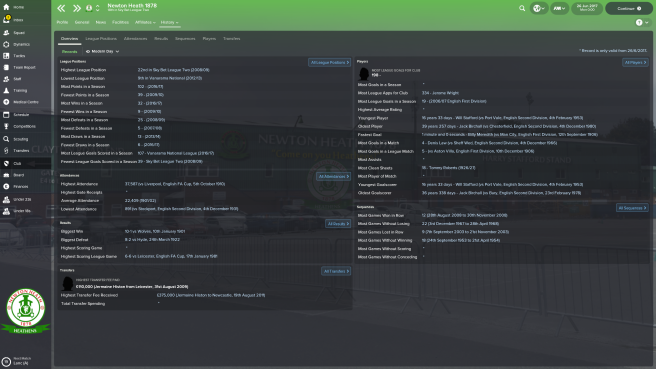 I then checked all the finances and found that they were in line with the rest of the league and also a few other bits and bobs, again to make sure it was all realistic, strangely encouraged by the fact they had been immediately relegated in the first season.  I stopped short at looking at the team so that I didn’t get any tips of players or staff to buy then dropped it and started the real save.

So here we are, the button has been pressed and let’s have a good look at the club from the inside, a day after I have taken charge.  You know the graphics, history and all that malarkey so here is the squad view, sorted on current ability with their attribs alongside.   Immediate thoughts are woohoo, a five star player and a few with potential, but other than that a pretty predictable, pretty dire bunch of newgens.

Going forward, as I’m sticking to my usual LLM priorities of determination, pace, stamina and workrate I am pleased to see it’s the kids who have the most determination and here’s the list sorted on that.

As we know though, that’s not all you need and here is the real tale of the tape from the comparison screen, for physical .. 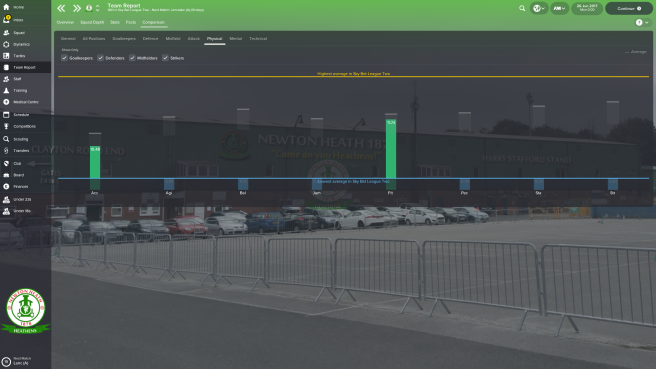 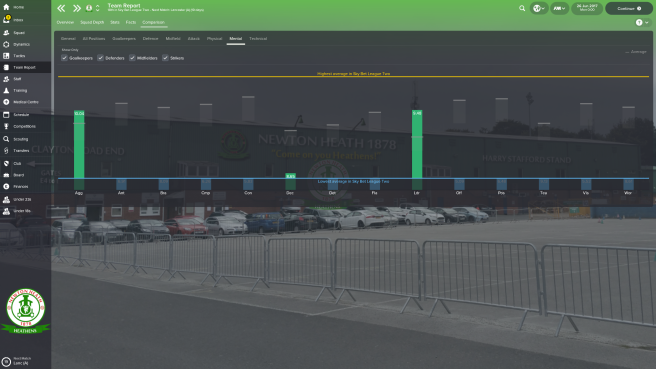 .. and technical (ffs come back Phil Jones, all is forgiven) ..

But it is what it is, a made-up team, predicted to finish 24th filled with dudes like this cheery fella, my goalie and Captain, who is really getting into the spirit of the save by looking like he’s been working down an 1878 mine non-stop for 12 years.  He’s that fugly I’m thinking about sending him to Marbella for a weekend just so our opponents don’t shit themselves when they see him. Joking aside, the staff team isn’t much better, with a couple of newgen coaches and (a little indulgence of mine) good old assistant manager Ken McKenna from my Morecambe save, who is the only real fella I put in via the editor. He’s not top of the line but I’ve had success with him especially with youth dev. so I’ve in put him in there as a little treat for all the hard work.  His coaching is mainly for fitness and I’m ok with that as I want him for his tactical knowledge and discipline, though his man management could be a lot better.

I said it was a short one so that my friends is the intro and where too now?  You can pretty much guess that I’m going to be sifting and sorting those players, getting staff on board and diving into the loan market, but as for tactics, I must admit that short of wanting to play a short passing build-up game I haven’t got a bloody clue yet.

Bye for now, keep an eye on youtube for more details and thanks for stopping by.